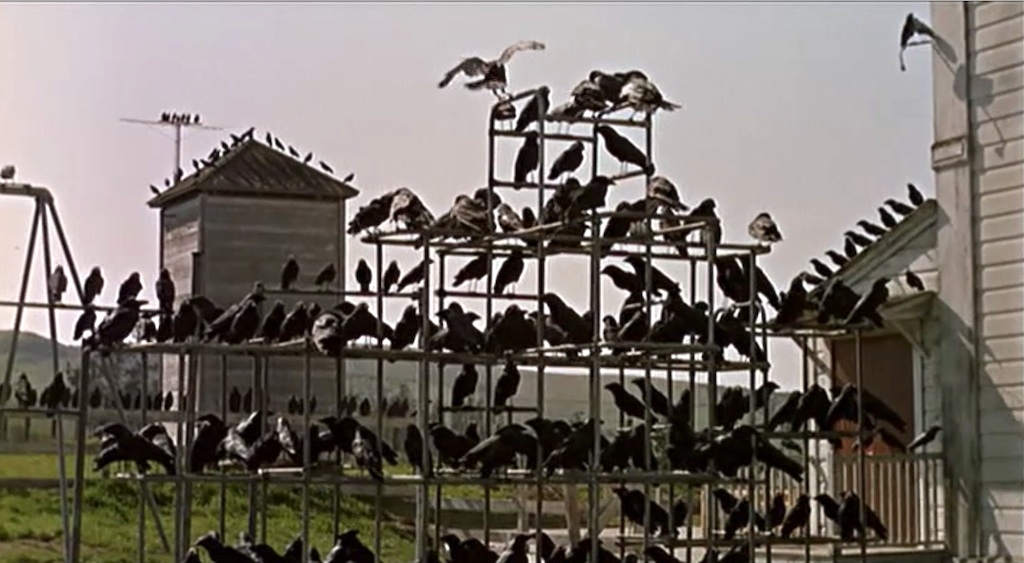 What’s Next?: The Master of Suspense

Bet you didn’t know that a lot of thought goes into creating a miniature setting. Here are my thoughts in the past week as I have begun preparing for next year’s show. They are probably not what you expected, but stay with me through the thought process and I will tell you what I am doing next year.

Right after the 2013 Philadelphia Flower Show opened, the participants in the Miniature Settings class began to speculate about next year’s displays. The theme of “Masterpiece” was announced in newspapers early in the week and this did not seem a particularly inviting theme if the show was trying to broaden its appeal. Masterpiece, as in paintings by old white guys, or still life studies in monumental museums, or Masterpiece Theatre? Don’t get me wrong, I love all three of these, but it did not seem a clever enough way to broaden a Philadelphia audience. On Thursday of Flower Show week, the meeting for the class chairs and other participants clarified the new theme. It would be called “ARTiculture,” a combination of art and horticulture. Again, that is something I personally like and spend most of my waking hours engaged with, but the coining of a neologism (new, made-up word) that combines what are perceived of as two of the stuffiest activities known to humankind—art and gardening—seems like a tricky choice.

Keep in mind that I am an anthropologist who studies and teaches (and has for more than 30 years) American popular culture, especially the movies, but also popular literature, comic books, fan culture, art, and pop culture phenomena (you know, vampires, zombies, wizards). From my perspective, the reason so many people are interested in popular culture is that it provides wonderful and accessible stories that we use to make sense of our everyday world and connect to each other. So, for example, every Sunday million of American watch the hugely popular zombie apocalypse show, “The Walking Dead,” on cable channel AMC and before, during, and after the show they exchange endless discussion about the characters, the plot lines, the divergence from the comic books, and what it would mean to live in a world where all the social rules are changed and all the landmarks of civilization are gone. There is even a live televised discussion after the new episode is aired (“The Talking Dead”) which provides intelligent and entertaining insights into the show. Sure, zombie shows are about the blood and splatter (there is a delightfully gruesome “In Memoriam” segment of “The Talking Dead” that recounts the week’s best zombie kills) but they are also about the stories that tie us together.

Stories. That is the theme that we will be promoting in the miniatures setting class for the coming year. Because stories are what the best miniature settings provide. Like stage sets, they give you an instant placement in another world occupied by people and things that tell a story about a moment in time or a particularly fascinating or difficult human problem. They can hint at human interactions that both succeed and fail, and they can show the fallout from mistakes, human frailties, passions, triumphs, and fears. If you haven’t seen that in the miniature settings in the past year, hopefully you will in the coming ones (as I become vice-chair of the class and Ron Hoess takes on the chairmanship).

But back to the 2014 theme. Our group is assigned a sub theme and damned if it wasn’t the one thing I hate more than anything else: “The Masters.” As in, put me in a prison with all of art history that defines good art as the stuff done by a tightly defined list of Western white males who have controlled “culture” for centuries. BIG SIGH. Of course I could try to defy “The Masters” male implications by doing Frida Kahlo’s Coyoacán garden (I even made a pilgrimage there years ago and will never forget its beauty).  I don’t have those old photos digitized but here is a view of Frida’s garden from a Diego Rivera (her husband) website:

But using Frida would just be applying that old 1980’s strategy of throwing one famous female artist at the male arts canon and hoping to make it crack. It’s still a possibility, still in the back of my mind, but I do have another idea.

Back to popular culture. There has for decades been a struggle in the arts world between high and low culture, fine arts and popular arts, the good stuff and the bad stuff. There is a reason popular culture is “popular” and that is because it is the culture of the people, all people, not just those educated in the fine distinctions of brush strokes or difficult aesthetic theories. Popular culture, as in themes and symbols and story lines most people are likely to get from the everyday world around them.

So my choice for the 2014 Flower Show will come from popular culture and since the movies are my passion, I will have to use a “Master” of the movies to make my setting. Yes, I know, this means a male master, but you can’t have everything and I have to fight one battle at a time. Trust me when I say I did consider a Walking Dead setting but there are not really any gardens in that lost paradise (the prison garden never got planted). But there is a Master of Horror, George Romero, who made a Pennsylvania-based zombie movie that became the model for all subsequent zombie flicks: the 1968 black-and-white film Night of the Living Dead. There is a great scene in a graveyard at the beginning of the movie where Barbra (that spelling is correct) and her brother Johnny visit the grave of their father in a yearly ritual. This time they are attacked by the dead who rise from their graves because of radiation or something. I wanted to portray the scene where Johnny creeps out his sister by saying,”They’re coming to get you, Barbra!” before the zombies really do attack. It would be cool to do a black and white scene (created with filtered lights) of that graveyard moment, one of the most famous in zombie moviedom:

What is stopping me from doing this scene? Mainly that we have heard much this year about the judges not liking miniature human figures placed in the scenes (which this setting would require). The reasoning of the judges was that they wanted the viewers to be able to enter the scene themselves, virtually, and so be part of the story. Since that is also our goal, I will not do this for the Flower Show (but may do it just for fun). So then I had another idea.

I have a short list of favorite movies that have nothing to do with the academic cinema studies lists that favor obscure foreign films and endlessly declare Citizen Kane to be the best film (ever try to watch that thing more than once???). One film on my favorite-and-I-have-seen-it-at-least-100-times list is the 1951 science fiction classic, The Thing from Another World (commonly called The Thing). The Thing is all about what happens when we encounter an Other, a being different from us. Great movie with two remarkable gardening scenes. One would be two gruesome (dead bodies providing blood for alien plants) but another would be fun to show. In this other scene of alien plants (the Thing is a humanoid vegetable monster) the plants are being grown in a laboratory: 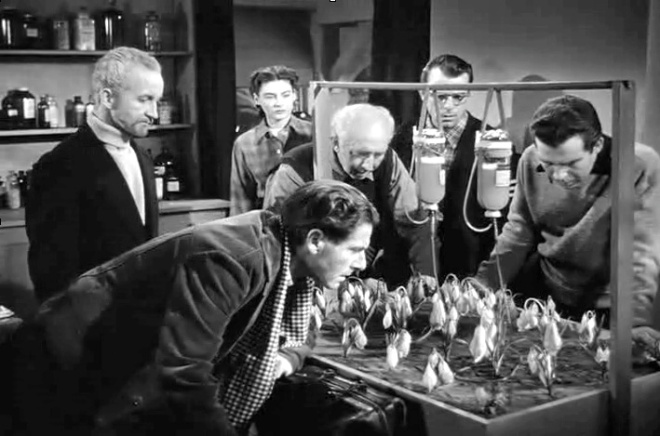 But if you look at the lab in this arctic setting, there are no other plants and The Thing itself is the most important plant in the whole movie. So, move on to one of my other favorite movies, Alfred Hitchcock’s The Birds. Now, gardens are not a particular focus of this movie (it is about inexplicable bird attacks on the northern California town of Bodega Bay) but there is one scene that I have always loved that is about gardening and it takes place right next to the famous scene of birds gathering in a school playground.

In this scene, Annie Hayworth, the school teacher at the Bodega Bay School, is in her garden at the back of her house. The wealth socialite, Melanie Daniels, who is pursuing Annie’s ex-boyfriend, Mitch, comes to ask Annie a question. The contrast between the women is fascinating. Annie wears  frumpy gardening clothes and has dirt smudges on her face. Melanie is gorgeous with her upsweep blond hair, fancy car, and fur coat.

Melanie and Annie have a discussion about the garden:

ANNIE: I’ve been wanting a cigarette for the last 20 minutes. I just couldn’t convince myself to stop. This tilling of the soil can become compulsive, you know.

ANNIE: Oh, thank you. Well, it’s something to do in your spare time. There’s a lot of spare time in Bodega Bay.

As the Master of Suspense, Alfred Hitchcock built one of the best suspense scenes with the birds gathering in the playground (you can view it here).

So, my scene will be of Annie’s house and garden, the school yard, and the school next door, and the gathering of birds in the playground and Annie’s house. It compresses several events into one miniature moment but I hope to contrast Annie’s beautiful garden with the destructiveness and violence of the bird attacks. By the way, have I said yet that I have already visited Bodega Bay three times, on trips I took to visit scenes from Hitchcock’s movies? More on that in a future posting.