While researching miniatures and models in the 19th century World’s Fairs, I came across this listing of cork building models from the 1851 Crytsal Palace (The Great Exhibition in London). I have uncovered many different examples of odd materials used to make the models but cork was surprising to me.

However, it turns out that cork models were a big thing in the late 18th and early 19th centuries. Here is a beautiful one from the Cooper Hewitt museum in New York which has a nice explanation of the models. 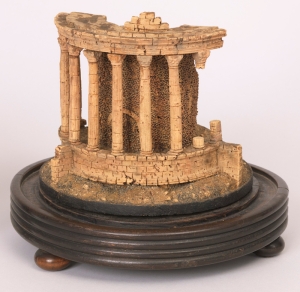 A recent post by the blog Building Collector has some other examples.

Sir John Soane’s Museum in London has a room dedicated to Soane’s collection of cork models. The room was recently renovated and featured in Apollo magazine: 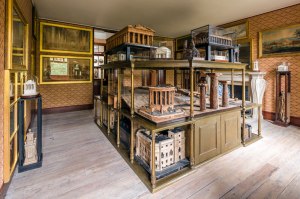 Another article on the museum featured this image of the Temple of Zeus or Apollo: 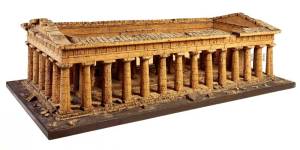 Both images are “Courtesy of the Trustees of Sir John Soane’s Museum.”

A replica of the Egyptian pyramid in cork that was owned by Thomas Jefferson can be seen in another Building Collector blog posting:

Check out this blog for a posting on “Cork Modeling” and some links to other online discussions.

The Museum Victoria in Australia has this cork model of the Roman Colosseum. Info on the model is here and an article on how it was recently studied with x-rays is here.

Another article on “Phelloplastik” (cork models) can be found at this blog.

Just when you think you know a lot about the history of miniatures and models, you are brought back to reality by finding a whole new trail to follow. Do a Google search for “cork models” and you will be kept busy for hours!