I met Lee Harper at the opening of Darren Scala’s new miniature exhibit, “BadAss Miniatures: Causing a Little Trouble,” on now at his gallery in Yonkers (I will cover the exhibit in the next post). Lee and I had a wonderful conversation about miniatures and she agreed to write a guest post for this blog explaining her fascinating dioramas using scaled skeletons and other eerie objects. I’ll let Lee explain her approach to the art of miniatures. See more of Lee’s work at her website, History Bones.

The concept behind History Bones is to bring obscure, forgotten and fascinating bits of history back in memento mori styled dioramas. What started as a bit of a Halloween gag has morphed into something I never would’ve thought of originally. I’ve been able to marry my history nerd self with my artist self! The stories you don’t hear about in history class fascinate me the most. Why use skeletons? There’s something beautiful about skeletons being the great equalizer. They represent all of us, no matter the gender, race, or nationality. Look at Memento Mori, Dia de los Muertos, the Danse Macabre, catacombs, ossuaries and the jeweled saints for examples of our endless fascination with death, bones and mortality.

I buy the skeletons in bulk, but everything else is handmade. My pieces are more about stories than exact replicas of items. Some pieces are a little crude, but I much prefer that to recognizing pieces that came from a hobby store. Part of the fun is collecting do-da’s, things from the woods or even trash that will later be turned into something else. I’ve got loads of stuff just waiting for their transformation!

A few examples of my pieces are D.B. Cooper, Typhoid Mary, barber-surgeons, catacombs and even jui-jitsu weilding suffragettes. My list of subjects are endless, since researching one thing inevitably leads you down a rabbit hole to lots of other good stuff.

One of my favorites is The Resurrectionists. Grave robbers, body snatchers, whatever name they went by, were common at one time to meet the demand of anatomy schools needing bodies for their studies. Doctors were happy to pay top dollar for fresh bodies, no questions asked.

Typhoid Mary is another good one. I like her piece because at first glance she looks like everyone’s grandmother preparing dessert. Yay! Except when you read the commentary you see one of the most notorious women in history serving what scientists now believe the dish that was the main contagion carrier. Homemade ice cream with fresh peaches served with unwashed hands from a typhoid carrier. The fact that this information makes it such a sinister scene is fascinating to me. 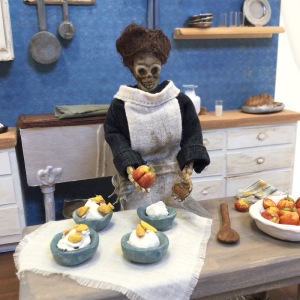 Everyone has heard of Peter and Catherine the Great, but not everyone knows that Peter had his good friend beheaded after he found out about an affair between this friend and Catherine. Peter had the head preserved in a jar and rumor has it that it sat on Catherine’s bedside table until Peter’s death. The scene depicts this couple in bed like any of us would be every night, reading, looking at iPads, etc., except for the… head in a jar. 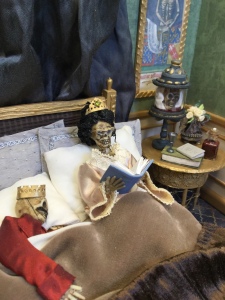 The catacomb piece is one of my all time favorites. It’s a combination of about 3 catacomb/ossuaries I looked up from around the world. The bone assembleges are made from real animal bones that I collected over time. I like to think that including the real bones it kind of gives them a second life.

Vlad the Impaler is a single figure piece. There’s no irony in his, just gore and a serious rock star stance on top of his conquered foes.

My latest piece is a jui-jitsu weilding suffragette. She’s got the sash, the hunger strike medal, her umbrella and serious martial arts skills.

I absolutely love researching the pieces. Not just for the stories, but for the clothing, the hairstyles, the architecture. What would they be drinking out of? What materials were the streets made out of? What facial hair is in style? The details are my favorite part. Little bitty details. And who doesn’t love little things? You’re reading Louise’s fantastic blog so I’m guessing you do!